On the International Human Rights Day – 10 December, the Centre for Civic Education (CCE) invites citizens to be part of the XII edition of the Montenegrin Film Festival on Human Rights FAST FORWARD, which is organized from 11 to 15 December in Podgorica, Kotor and Berane, in order to give impulse to the affirmation of the culture of human rights in Montenegro.

This year’s theme of International Human Rights Day is the battle for the rights that are the foundation of peace in all societies and the formation of a just society for future generations. With the motto EVERLASTING BATTLES, the FAST FORWARD 2021 Festival brings 15 powerful human rights film stories. These films are of exceptional artistic quality, as confirmed through numerous awards at renowned festivals. Also, at the opening, the award of the FAST FORWARD Festival and CCE for the affirmation of human rights and civic activism will be assigned. 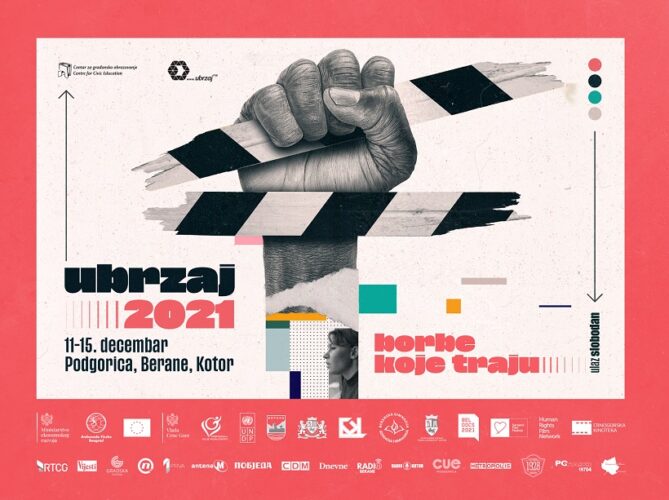 The FAST FORWARD 2021 festival opens with the film COMPARTMENT NO.6, by Finnish director Juh Kuosmanen, who won the Grand Prix in Cannes this year. This film is a melancholic, subtle and touching story about a young Finn Laura, a student of archeology, and the Russian miner Ljohi, whose unexpected encounter in compartment no. 6 leads these two people to face the truth about their own loneliness and longing for human connection. According to film critics, “Compartment no. 6  evokes strong nostalgia for the kind of loneliness we don’t really have today, and for the kind of love that was cure for that loneliness ”(Jessica Kiang, Variety).

Part of this year’s festival programme is dedicated to the issue of physical and mental health, as well as the stigma that people go through because of their diversity or problems they face in life. In this segment are THE SELF PORTRAIT, by Norwegian authors Espen Wallin, Margreth Olin and Katje Høgset; then THE REASON I JUMP, by Jerry Rothwell; as well as the film THE RESTLESS, by Belgian director Joachim Lafosse.

FAST FORWARD 2021 traditionally focuses on dealing with the past and related issues of fate of those whose lives have been forever transformed by war, repression of the regime, militarization and indoctrination of society, and nostalgia for the past, so in this part of the programme brings films TOWN OF GLORY, by Russian director Dmitry Bogolyubov; LITTLE PALESTINE, DIARY OF SIEGE, directed by Abdallah Al-Khatib; LEAVE NO TRACES, by Polish director Jan P. Matuszynski; but also short films – DUSK, by Hungarian director Bálint Bíró, and FROM THE BALCONY, by Greek director Aris Kaplanidis.

Also, one of the pervasive themes of the FAST FORWARD festival is related to gender identities, and this year’s program includes the film LITTLE GIRL, by French author Sébastien Lifshitz.

FAST FORWARD 2021 also addresses certain utopian issues, through the film A MACHINE TO LIVE IN, by Yoni Goldstein and Meredith Zielke, then a holistic approach of grief and remembering loved ones through work BEAUTIFULL SOMETHING LEFT BEHIND, by Danish director Katrina Philp, complex family relationships through the short film SUMMER PLANNING, by Romanian author Alexandru Mironescu, but also a call for an uprising for a more just and humane world through THE NEW GOSPEL, by Swiss director Milo Rau.

This year’s edition will be closed by the absolute winner of Pula Festival in 2020, the film TEREZA37 by Croatian author Danilo Šerbedžija, and on that occasion the special guest of FAST FORWARD 2021 will be the main actress and screenwriter of that film Lana Barić.

The accompanying programme of FAST FORWARD 2021 includes a panel discussion on the rights of PWDs and a conversation with Lana Barić.

This year’s edition of the Festival was supported by the Ministry of Economic Development of Montenegro, the Embassy of Finland in Belgrade, UNDP within the project Reform of the National Disability Assessment System, the Municipality of Berane and the Municipality of Kotor. Partners are BELDOCS, Sarajevo Film Festival and Montenegrin Cinematheque.

Recognizing the public importance of the FAST FORWARD Festival, support this year is provided by the public service Radio Television of Montenegro (RTCG), with portal RTCG.me, then the newspaper, portal and television Vijesti, Radio Berane and Radio Kotor, as well as CdM portal. The growing importance of the FAST FORWARD Festival was also recognized by our new media partners – television Gradska TV, Nova M and Prva, radio stations Antena M and Gradski radio, dailies Pobjeda and Dnevne novine, as well as portals Dnevni novine and Antena M.