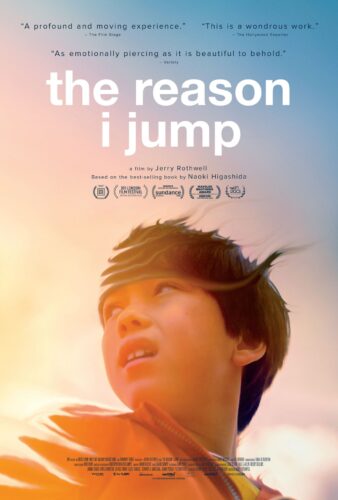 This fantastic documentary introduces us to the world of autism in the most amazing and deeply emotional way. Based on Naoki Higashida’s bestseller, The Reason I Jump is … an immersive cinematic exploration of neuro-diversity through the experiences of non-speaking autistic people from around the world. The film blends Higashida’s revelatory insights into autism, written when he was just 13, with intimate portraits of five remarkable young people. It opens a window into an intense and overwhelming, but often joyful, sensory universe. Thoroughly observed moments from the life of each of the five characters are connected by motifs and excerpts from the book. The film follows a Japanese boy who travels through an epic landscape, gradually discovering what autism means to him, how his understanding of the world differs and why he behaves the way he behaves and after all: why he jumps. The film has woven all these elements into a sensually rich visual story that leads us to the core of Naoki’s message: if someone doesn’t know how to talk, it doesn’t mean that they have nothing to say.

Jerry Rothwell is a filmmaker whose work includes the award-winning feature documentaries: The Reason I Jump, based on the bestselling book by Naoki Higashida; How To Change The World, about the founders of Greenpeace; Sour Grapes (co-directed with Reuben Atlas) a film about a wine counterfeiter Town of Runners, about two girls in an Ethiopian village who aspire to be athletes; Donor Unknown, about a sperm donor and his many offspring; School In The Cloud, about radical educationalist, Sugata Mitra; Heavy Load, about a group of people with learning disabilities who form a punk band, and Deep Water (co-directed with Louise Osmond), about Donald Crowhurst’s ill-fated voyage in the 1968 round the world yacht race. His work has won numerous accolades including two Grierson Awards, a Sundance Special Jury Prize, an RTS Award, the IDA Pare Lorentz Award and a BAFTA nomination.  At Met Film Production, he has executive produced and worked as an editor on numerous feature docs including Men Who Swim, The Village At The End Of The World and After A Revolution.