The FAST FORWARD Human Rights Film Festival Montenegro 2022 today brings series of premieres, including the documentary ŠEJLA with a panel discussion after the film screening, at the Montenegrin Cinematheque in Podgorica, while the Kotor edition of the Festival begins with the premiere of the film CORSAGE in the cinema “Boka”.

The second day’s programme starts at 17h00, when the audience in the Montenegrin Cinematheque will have the opportunity to watch four short documentaries produced within the framework of the IPA Interreg Italy-Albania-Montenegro programme “RECON”, whose authors are from Albania and Montenegro. The first film LEMONS and ORANGES is signed by the young author Enxhi Noni, a student of sociological and cultural anthropology, and it touches upon deep questions of existential nature through narrative angles. From 17h30, the film WHY SO? by multimedia artist Una Jovović, who focuses on the traumatic collective memory of Albanians under the totalitarian rule of communist leader Enver Hoxha is on the repertoire. Furthermore, from 18h15, another historical story A POEM A DAY KEEPS WAR AT BAY, directed by Tamara Pavićević, which sheds light on the Albanian history of the 20th century, told through the poetic angle of an outsider. This serial concludes, from 18h40, an experimental film ECHO OR THE HERO’S JOURNEY, by Albanian director Dario Haruni, who, through a Jungian approach, deals with the relationship between religion and faith, seeking a way to find the unity of these two polarities. 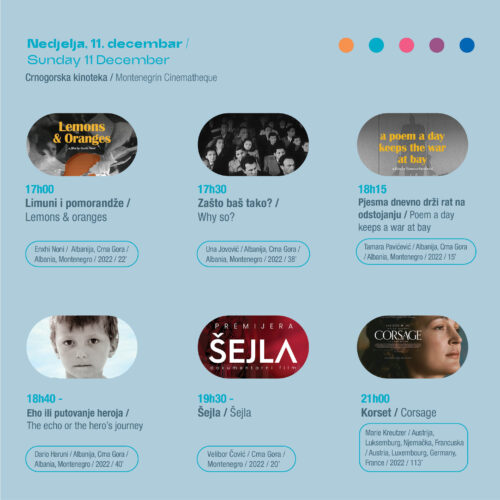 The premiere of the documentary ŠEJLA, directed by Velibor Čović, a prominent Montenegrin journalist and author whose films have been screened at international film festivals, is on the programme from 19:30. “Šejla” is the story of a nineteen-year-old girl, a victim of femicide and another in a series of examples of dysfunctionality, slowness and untimely action of the system. The film follows a true event that strongly shook the Montenegrin public, and the importance of strengthening prevention and protection mechanisms against violence against women will be discussed at the accompanying panel discussion.

Also, tonight, with the premiere of the film CORSAGE, by the Austrian director Marie Kreutzer, the Kotor edition of the FAST FORWARD Festival opens at 18h00, in the cinema “Boka”. This film comes to FAST FORWARD with numerous awards, including an award from this year’s Cannes Film Festival to the lead actress, Vicky Crieps, for a brilliant performance, then Srce Sarajeva for Best Actress from the Sarajevo Film Festival, Best Film from the London Film Festival, etc. The plot follows the life of the Austrian empress Elisabeth, one of the most powerful rulers of the 19th century, and her struggle to meet the standards of the hyperbolized image of her personality and beauty in the public. In the Montenegrin Cinematheque, CORSAGE is on the programme from 21h00. 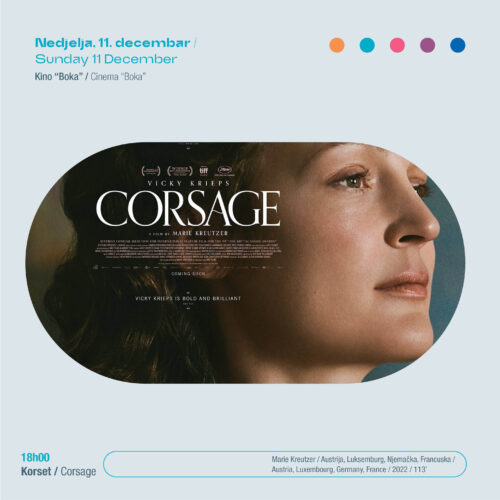