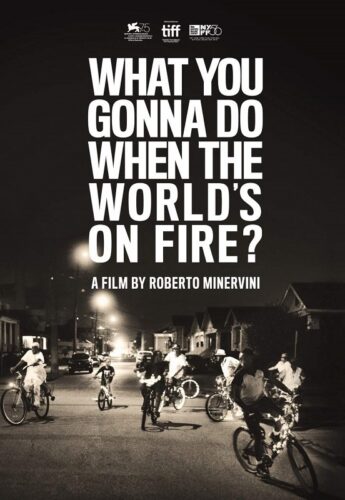 ‘What You Gonna Do When the World’s on Fire?’ follows the life of black men and women aiming to enlighten the toxic effects of the centuries-long racism which is still vivid through their personal stories in horrendous forms. The film brings us into a community of African Americans on the south of America, into summer 2017, when a string of brutal killing of men sent shockwaves throughout the country. The issue of race is still open in America, and this film is an intimate portrait of the lives of those who struggle for justice, dignity, and survival.

Roberto Minervini is born in 1970, in Fermo, Italy. He holds a master’s in media studies from the New School University in New York. This acknowledged director, screenplay writer, music producer and photographer based in the US is known also for spending months or years building connections and trust within communities as he films their lives. Through films, he is focusing on human rights, rights of marginalised population and various forms of discrimination. His film Stop the Pounding Heart (2013) was screened in Rotterdam and Cannes, and The Other Side (2015) was screened in the Un Certain Regard competition at Cannes.