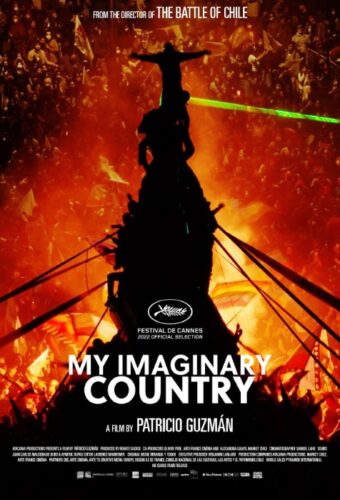 One day, without warning, a revolution exploded. A million and a half people in the streets of Santiago, the Chilean capital, demanding justice, education, health care and a new constitution to replace the strident rules imposed on the country during the Pinochet military dictatorship. Urgent and topical, My Imaginary Country features harrowing front-line protest footage and interviews with the dynamic activist leaders who are bringing about a regime change. The director powerfully connects Chile’s complex, bloody history to contemporary revolutionary social movements and the election of a popular new president.

Patricio Guzmán is a Chilean documentary film director, born in Santiago, Chile in 1941. After the coup d’etat that brought down Salvador Allende, Patricio Guzmán was held in solitary confinement in Santiago’s National Stadium and threatened with execution. He abandoned Chile in November 1973. He has lived in Cuba, Spain and France, where he lives now. Six of his works have premiered at Cannes film festival, amongst which stand out The Battle of Chile, The Pinochet Case, Salvador Allende and Nostalgia For the Light. He is the founder of the Documentary Film Festival of Santiago. His trilogy The Battle of Chile is considered one of the best documentary films ever made.