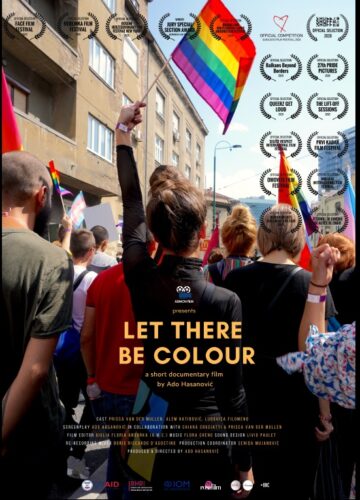 Documentary ‘Let there be colour’ is addressing the first Pride Parade held on 8 September 2019 in the centre of Sarajevo. Were people ready for that event? The film investigates the positions and feelings which the society has towards the LGBTQ community, and it also provides an insight into the protest walk against the Pride Parade held simultaneously in Sarajevo.  To what extent our region is backward compared to the EU member states when it comes to human rights and to what extent any tolerance of discrimination can be dangerous?

Ado Hasanović is born in 1986, in Srebrenica, Bosnia and Herzegovina. He lives in Rome, where he specialized as a film director at the prestigious Centro Sperimentale di Cinematografia National Film School. Later on, he finished a Master in Dramaturgy at the Academy of Performing Arts in Sarajevo. Since 2015, he is the art director of the Mediterranean Short Film Festival “Paths of the Author” in the Italian city of Sant’Antioco.  The public knows him for his short documentaries and features in which he deconstructs taboos in Bosnia and Herzegovina. His short films The Angel of Srebrenica (2010), Blue Viking in Sarajevo (2012), Mama (2013), Breath of Life Srebrenica (2015), Pink Elephant (2017), Nomophobia (2019) and Let There Be Colour (2020) enjoyed world-wide festival selections and won many awards. He is currently working on his first long feature film.