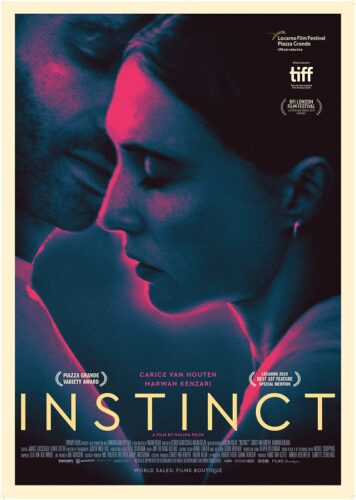 ‘Instinct’ is a provocative psychosexual drama. Nicoline, an experienced psychologist who starts a new job at a penal institution when she meets a patient Idris, an intelligent serial rapist who committed number of heinous crimes. Nikoline became intrigued by the charismatic inmate who seems capable of manipulating people. The team of doctors is satisfied with his progress, but Nicoline does not have trust into him and she is trying to postpone his release.  Between two of them starts power play which brings into question her professional relation with that inmate.

Halina Reijn is born in 1975, in Amsterdam, Netherlands. She was professionally trained at the Maastrihtu Academy of Dramatic Arts, and in 1997 she debuted on the scene as Ophelia u “Hamlet”, directed by Theu Boermans. She continued to act on stage and made numerous noted pieces, but also played in film. In 2005, she published her first novel. As actrees, writer and director she got number of important awards in Netherlands. In 2019 she was named as one of the 20 most influential people by Dutch media. She writes columns for Dutch and Belgian media and is regularly a co-host on one of the best watched daily news shows on Dutch TV.