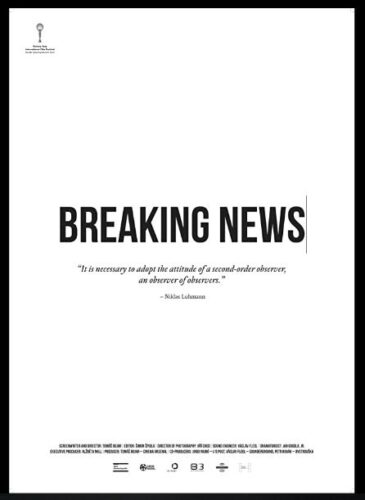 One day, two newsrooms, and one event that has grabbed the headlines. Tonight, the Czech president is expected to make it clear whether he is going to run for the office again, announcing his decision to a group of his sympathizers and supporters gathered at the Prague Castle. Journalists are not allowed to attend the event and will only be notified about the president’s decision the next day. This obviously piques their interest, and they want to get the information tonight.

Tomaš Bojar is born in 1981, in Prague, Czech Republic. He holds holds a degree in politics, law and moral philosophy (PhD) from the Charles University in Prague. He has been active in the film industry since 2003, first as a scriptwriter, later also as a producer and director. He worked on multiple film projects in a creative duo with Pavel Abrahám – most notably on two feature length documentaries, “Czech RAPublic” (2008) and “Two Nil” (2012). Together with Rozálie Kohoutová he directed a feature-length documentary, “FC Roma” (2016). He runs a small-scale production company Cinema Arsenal.