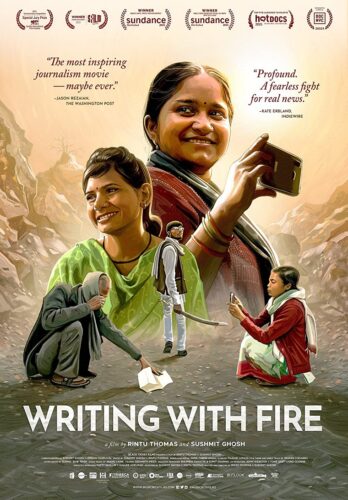 The story of Khabar Lahariya, the only news agency in India run by Dalit (oppressed-caste) women. Armed with smartphones, Chief Reporter Meera and women journalists break traditions, be it on the frontlines of India’s biggest issues or within the conﬁnes of their homes, redeﬁning what it means to be powerful. Set in the backdrop of an increasingly polarized world, the film journeys with Meera and her band of sisters for five years, presenting the millennia old caste system in India, tradition, sexual violence against women and corruption.

Rintu Thomas is a director-producer from India. Over the last 10 years, her shorts have ranged from themes of environment and public health to women’s rights and resilience of local communities towards climate change, as Dilli (2010) and Timbaktu (2012). Her films have travelled to film festivals across the world, are being used as advocacy tools for social impact, included in the curriculum of universities and exhibited globally, including at the United Nations Climate Change Conference.

Sushmit Ghosh is a director-cinematographer from India. In 2009, he co-founded Black Ticket Films, a production company whose films are being used as advocacy, impact and education tools by institutions across the world. Sushmit has also served on the jury of the National Awards in India.