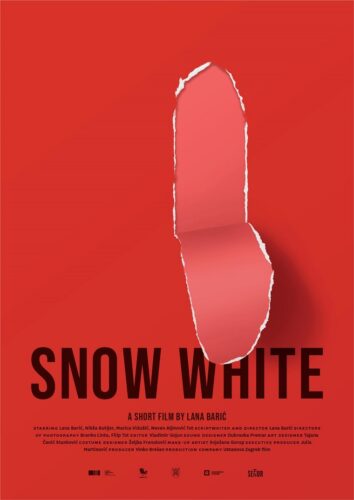 Forty-year-old Željka is living a quiet life in an isolated village, but an unexpected visit will take her back to the past, shaking up her daily routine. This thought-provoking film deals also with a female character, a woman who struggles with her painful past. Impressive visual style and surreal turn of the narrative, opens many possible ways to contemplate on what happens to a woman whose soul is wounded.

Lana Barić was born in 1979 in Split, Croatia. In 2005 graduated in acting from the Academy of Performing Arts in Sarajevo. Since 2011 she has been a member of the drama ensemble at the Croatian National Theatre in Zagreb. She has acted in more than forty stage productions and in as many films and series, receiving numerous awards and accolades. She has written several screenplays for short films as well as the screenplay for the feature film Tereza37, which won her the Golden Arena for Best Screenplay at the 2020 Pula Film Festival. The short film Snow White is her directorial debut for which she wrote the screenplay and played the lead role.