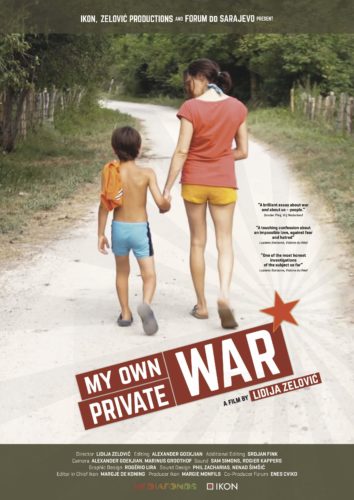 How do you get to terms with your war history? And how can you ensure that your children don’t have to carry this burden? In this very personal documentary, Lidija Zelovic tries to answer these questions. Zelovic grew up in the Bosnian city Sarajevo, then still Yugoslavia, where the civil war of 1992 divided the population. In 1993, she fled to the Netherlands. As a war correspondent for the BBC and later as a filmmaker, she kept trying to get closer to the truth about war. What happens to a family long after the war is over? During the making of this film Zelovic finds that the real war is raging within people. Even inside herself. To try and leave the past behind and no longer feel like a refugee, Zelovic tries to identify the source of hostility…

Lidija Zelović was born and raised in 70s in the land of milk and honey, Yugoslavia. She studied Yugoslav literature and Serbo-Croatian language. When the war started there was no Yugoslav literature anymore and there was even less of the Serbo-Croatian language. So she left. Lidija became a refugee in Netherlands. She felt that she had so much to say but her strongest weapon – language – became inadequate. Her Serbo-Croatian became useless and even tough she learned how to speak Dutch, it will never be what it should be to really express how she feels. Lidija needed to find another tool. She went back to university to study again, this time ‘Film and TV sciences’. This is how Lidja Zelović became a film director, and by now she has directed seven documentary films..