With the moto „Louder than silence“, Centre for Civic Education (CCE) is organising the XIII edition of the FAST FORWARD Human Rights Film Festival Montenegro 2022 in Podgorica, Kotor and Berane.

Central programme of this year’s Festival will be carried out from 10 to 14 December in Music Centre and Montenegrin Cinematheque in Podgorica, and the additional editions will be held in „Boka“ Cinema in Kotor from 11 to 12 December and in Culture Centre in Berane from 13 to 14 December 2022. 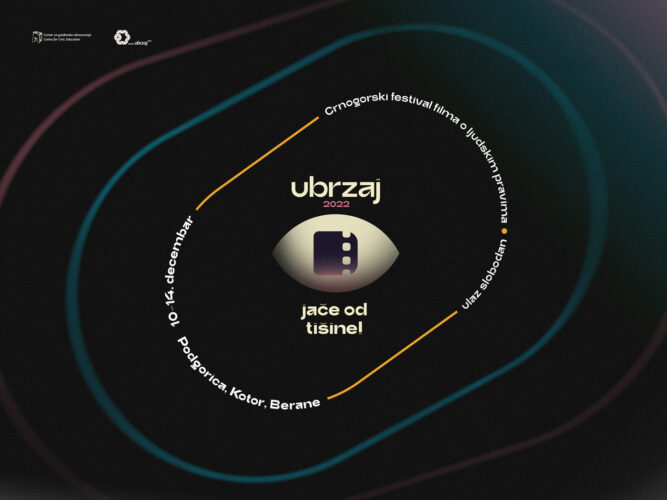 XIII edition of the FAST FORWARD Human Rights Film Festival Montenegro 2022, as always, brings exclusively premiere releases of films of exeptional quality and latest productions, which have already succeeded to receive nominations and awards at prestigious regional, European and international festivals. In addition to the film screenings, as in previous years, an accompanying programme is planned to reflect to the messages of certain films and update some of the burning human rights issues.

Through the FAST FORWARD Festival, we continue our decades-long advocacy for the affirmation of human rights, attracting a wide and diverse audience, which gives to the Festival a special value in the polarized Montenegrin framework. Focusing on the modern concept of human rights through the medium of film makes the FAST FORWARD Festival a meeting place for the most diverse actors in the society, which strengthens tolerance and inclusion in society.

The films we present are often far from commercial film expression, but they represent a valuable contribution to building a culture of human rights, because with their screenings we try to encourage critical reflection, dialogue and action, gathering individuals and organizations that can be agents of change.

The response and reactions of the public encourage us to permanently link the FAST FORWARD Festival to the cultural and film map of Montenegro. Hence, this year we also invite our audience to step out of their comfort zone and face new and challenging realities, and to identify, at least for a while, with the fate and lives of the most diverse individuals and communities, and to break the silence with them or for them, where there should not be any silence. Admission to all screenings is free.