For many in the region, lives are still in limbo, because the shadows of the 90s are above us all, and this should be openly discussed, with facts, and difficult topics communicated through film and media to contribute to dealing with the past, as concluded at the online book promotion and virtual photo exhibition “Life in Limbo – A Book of Scars” and a panel discussion “Shadow of the 90s over the Balkans” during the last day of the Montenegrin Human Rights Film Festival FAST FORWARD 2020, organized by the Centre for Civic Education (CCE) and the ZfD Forum. 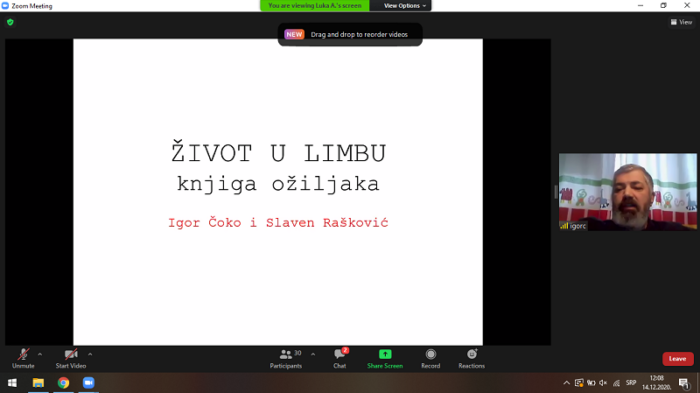 Opening the promotion, Miloš Vukanović, a CCE advisor, explained that the book “Life in Limbo – A Book of Scars” deals with Knin, a city that is now reduced to a myth in Croatia, while the truth about its recent past has been largely suppressed or tabooed.  “At the level of society, Knin is the traumatic centre of the conflict of the 1990s, a symbol of the Serbian uprising and secession, and then a symbol of absolute Croatian victory, with both events accompanied by mass crimes, killings and persecution of “others”. On the other hand, at the level of everyday life, there are countless private traumas of natives, returnees and immigrants expelled from other parts of the former Yugoslavia, but also economic and social devastation, with the fact that the Croatian state has been tragically unable to create conditions for a sustainable, let alone a promising life in the areas she fought for”, he said.

Nataša Govedarica, programme director of the Forum ZfD Office, emphasized the importance of dealing with this topic by people who see it not only from an investigative but also from a deeply emotional side. “Talking about personally experienced topics, while maintaining a kind of objective position, strongly contributes to dealing with the past and conveying the truth through means such as the camera or paper, and that is an exceptional experience”, she said. “What the FAST FORWARD Festival and ForumZfD do with addressing difficult topics through the prism of art and media brings a special way of communicating with the audience. When that approach is supplemented with personal experience and an objective shift in the perception of the issue, we come to a big step forward”, she concluded. 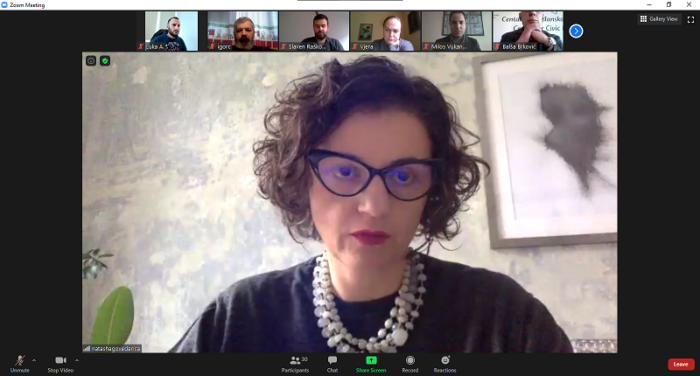 The authors Igor Čoko, a documentary photographer, and Slaven Rašković, a sociologist and civic activist, spoke at the book promotion and the virtual exhibition. They were born in Knin, and in August 1995, like thousands of fellow citizens, found themselves in refugee lines. Their monograph – accompanied by numerous gloomy black and white photographs – boldly and honestly cuts into myths, bringing the story of Knin and its inhabitants over the last thirty years.

Igor Čoko explained that “the photographs in the book were made in such a way to avoid people or to make people crawl like some pushed shadows that actually live in limbo. Here the question of limbo is posed very clearly and we have received an answer through this book as to whether or not they have in fact yet moved away from that story. Slaven’s texts deal with events up to 1996, and my photographs date from 2019 and 2020. In the meantime, we have 24 to 25 years of the unchanged visual identity of the city, and in that context, we have that limbo, the screaming silence, where nothing happened”, said Čoko.

Slaven Rašković stated that it was challenging to deal with the story that people around us experienced and try to avoid divisions in that experience. “This book is an attempt to show some direction so that conversations and dealing with the past do not lead to additional divisions but to the creation of an innovative approach that will help us understand what we have experienced.” He emphasized the importance of promoting this work in Knin, as people are not yet inclined to talk openly in public about difficult issues, although they privately feel and show the need for it. “How bad things are even today is shown by the fact that after our promotion in Knin we did not have a single question, none dared to comment in that public space. Only at a later gathering did people have the freedom to comment with us. I hope that this book, however, will encourage people to deal with difficult topics more openly”, he said.

Upon the book presentation and accompanying photos, a panel discussion “Shadow of the ‘90s over the Balkans“ followed, which brought together speakers from Montenegro and the region, recognized by their critical review of the last decade of the XX century.

Hrvoje Klasić, a historian from Zagreb, emphasized the importance of learning the facts but also pointed out the challenges that accompanied the numerous efforts to make a joint textbook about the 90s. “However, for this to be possible in the region, there would have to be a consensus on victims and perpetrators, there would have to be conditions that would not challenge anyone in Serbia to judge what was happening in Srebrenica or, say, Vukovar, or anyone in Croatia to not condemn what happened to Serbs in Croatia. That would be a huge step forward”, he said. Klasić pointed out that such attempts remain on an individual level, i.e. that some professors and historians are open-minded, ready to cooperate and have multi-perspectival views, but also warned that there are also those who find it easier not to criticize. 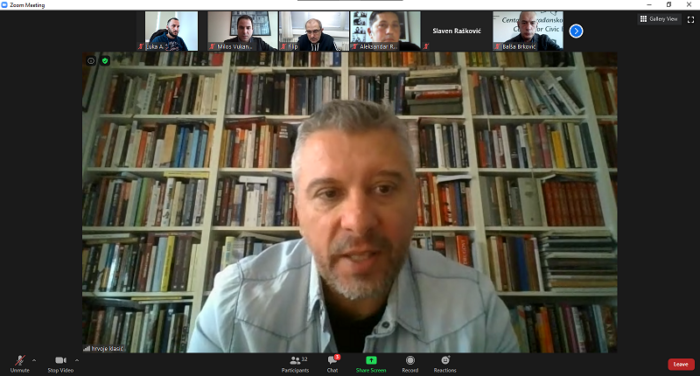 Filip Švarm, a journalist from Belgrade, considers that the truth always comes out. “When you have an event happening before your eyes, there is a great interest of the public to know about it. During the ‘90s there were wars, arrests, being taken to the battlefield. Few people knew the facts, but they wanted to know more and we somehow managed to work. Today we are trying to make these already historical topics attractive, to address the audience, especially young people, through the culture of remembrance and show that the reality is different from the one served by propaganda, that the people who are now in power in Serbia are responsible for what happened in the 90s and to enable them to conclude for themselves what the long-term consequences of the ‘90s are”, he said and expressed his belief that there will always be those who will not give up the truth.

Balša Brković, a writer from Podgorica, believes that, when it comes to literature, books from that period had the function of opening a Pandora’s box from which all the evil of the ‘90s came out. “Historical events have no duration, that is, they last through traumatic material. I’m sure the ‘90s will be literary inspiring and will provoke authors to say something else. Young people today are not interested in that period, which is not good. That is why books like the one presented today are important and literature can contribute to a kind of therapeutic dimension for society “, concluded Brkovic. 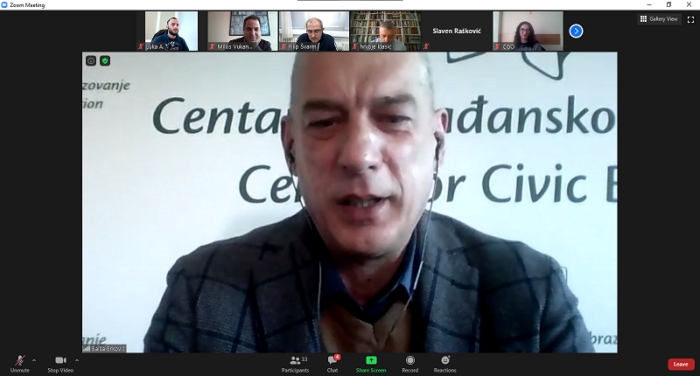 Aleksandar Reljić, director and author of the film “Sandžak Process”, which was screened on the last day of the FAST FORWARD Festival, points out that he found the motivation to shoot in events that are not talked about even today. “The whole story of the staged arrests was in the service of sowing fear, about 17,000 people went through police torture, and many left the territory of Sandžak. That topic has been forgotten in public”, said Reljić. According to him, the realization of the film had numerous problems, especially during the collection of materials. Reljic also pointed out that few young people are interested in our recent history, assessing it as dangerous, “because ignorance of the past is something that revives nationalist ideas”, he said.

The event brought together about 40 participants from Montenegro and the region.