Podgorica, PR Press Service – Regional authors strongly contribute to the development of films that address human rights as well as films dealing with the past, thus informing about historical events and shaping collective consciousness of society.

This was announced at a panel discussion, “Film Deals with the Past”, organized by the Centre for Civic Education (CCE), in cooperation with the forumZfD. 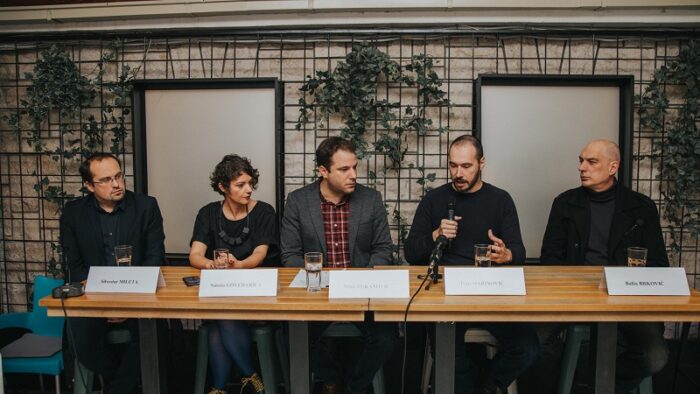 The dramatist and programme director of forumZfD, Nataša Govedarica, said that the phenomenon of the human rights film festivals is relatively young.

“In the mid-1990s, large, primarily human rights organizations, began with establishing human rights festivals, and this expanded later. Establishment of this practice has raised number of questions, namely what constitutes a film in order to be recognized as a human rights film, as well as how to select such films”, Govedarica explained.

She assessed that regional authors strongly contribute to the development of films that deal with human rights, and in particular films dealing with the past.

The film Diary of Diana B is an example of how human rights violations and topics from the dealing with the past framework are treated at the high aesthetic and ethical level. The film has the ability to break through indifference, to simultaneously educate and to create our images and collective memory of particular events. It also touches our hearts, which history textbooks have no ambition for”, Govedarica assessed.

“These films are getting attention and opening important discussions. They are not part of the dominant discourse, but they do occasionally stand out when repeatedly rewarded and when provoking some controversy that is interesting to wider public or media”, Govedarica said.

Although films about human rights were noted, she said that society remains reluctant to deal with such topics.

“It is hard to expect that people will be happy and willing to dig and screen and then watch, especially in their own history which do not portray the nation in the best light. This is not realistic because the process is ongoing. But our obligation is to keep these topics open, as much as we can, through such festivals, different initiatives and activities of civil society”, Govedarica concluded.

The film critic and historian from Zagreb, Silvester Mileta, said that the research for the film “Diary of Diana B”, which opened this year’s edition of the FAST FORWARD, took three years.

“The research included 25 archives and museum institutions in Croatia, Serbia, Bosnia and Herzegovina, Germany and Slovenia. When a historian works for a film, it involves journalistic, investigative and detective methods. We interviewed more than 100 surviving child witnesses, as well as people related to Diana Budisavljević”, Mileta explained.

He said the research shed light on a significant World War II story, which he said was unknown until 2003, and which the film’s director revealed in 2010.

“The research was challenging, as we encountered something that was completely new. Given the fragmented preservation of the archives in the countries of the former Yugoslavia, it was still possible to find something. Also, it was very inspiring part of the conversation with the surviving children, family members or associates of Diana Budisavljevic”, said Mileta.

He also stated that the historical documents on which the film was based were challenging because they were devoid of emotion and personal testimony.

“It was very important for the director to check the veracity of the text and to give triple documentary confirmation. That included archival material, testimonies of the survivors and finally the diary of Diana Budisavljević”, Mileta stated.

He explained that it was difficult to combine the three forms while directing the film.

“The film was initially conceived as documentary, and then we realized that playful reconstruction was necessary, and that the archive part would be the central part of the film,” Mileta concluded.

The director, Ivan Marinović, believes that viewers are often subject to the images they receive through films.

“What we can’t imagine, what we don’t know, if we see it on film, enters our memory. When you ask the average person what Prince Lazar looks like, it will be Miloš Zutić who played his character, and if you ask the older average viewer what Šćepan Mali looks like, he will tell you that he is an actor Rade Marković with mustache. This is the way we are informed through film, which remains in our memory as a fact”, said Marinović.

He said the film represents mechanism, which informs and shapes society. Talking about films based on historical facts, Marinović stated that such films, because of their nature, use dramatic structure.

“Entire historical narrative has to adapt to particular structure in order to make it understandable to the audience. If one were to strictly adhere to the facts, data and vastness of history, that film would, in most cases, be impossible for watching. It always models history into one form, which in the end can not be completely true”, Marinović said.

He explained that a lot of manipulation happens through the script writing and film shaping, and in the end, as he said, the film communicates in its own language, which involves composition, camera movement, frame, sound and music. 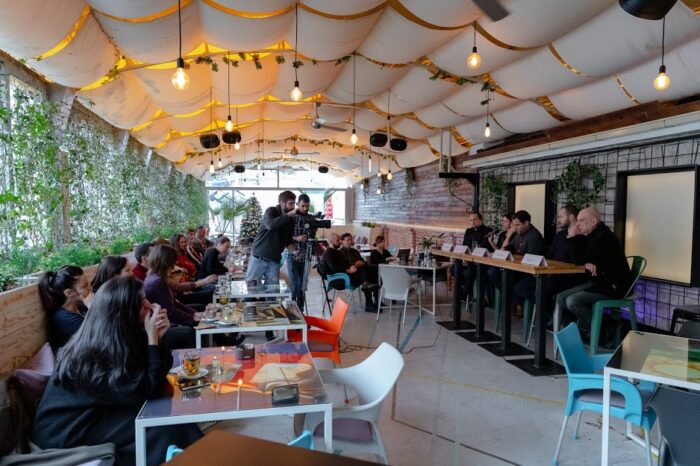 Marinović believes that the reach of films whose theme are human rights is insufficient.

“These days, we are all pleased that the movie Diary of Diana B has 20,000 viewers in Croatia or in Serbia, but if it is compared to the mainstream films it is an incomparable figure. The issue of films dealing with human rights and confronting us with the past of the 90s cannot be ignored by the cultural policy of our societies”, Marinović said.

He said that it was necessary for such films to penetrate national frequencies, otherwise, as he concluded, they were deprived of the opportunity to make more importance within society.

The writer, Balša Brković, said that film is the key contemporary art.

“The film has the ability to clarify some of the traumas in suggestive manner and to go beyond classical literature or science’’,  said Brkovic.

He assessed that the FAST FORWARD Human Rights Film Festival has been fast-paced into the spirit of the Capital for years and becomes part of the city’s current identity.

“The film can cope with the powerful and their forgeries, precisely because the effect of the film is greater than any other art or expression. The power and ability of the film is to get into traumatic episodes and to open up some stories in the best possible way. In that sense, this festival and these stories are especially important in a culture like ours, where there is a kind of fear of initiating traumatic topics”, said Brković.

He stated that it is the responsibility of the artist to, without compromise, raise meaningful topics, which do not have to give a final picture but these initiate certain stories.