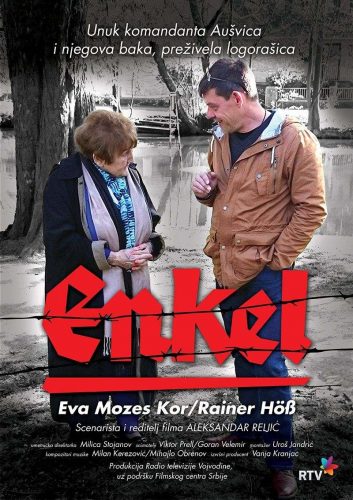 Documentary ‘Enkel’, produced by Radio Television Vojvodina, reveals a story on former inmate Eva Mozes Kor, who survived Holocaust and Nazi experiments conducted by doctor Jozef Mengel. In 2014, she symbolically adopted an Auschwitz commander’s grandson, Rainer Hoess. The two, with their specific experiences, are united in struggle against Neo-Nazism, antisemitism, racism and xenophobia around the globe.

Aleksandar Reljić is a journalist and an editor in Radio-Television of Vojvodina. He was born in 1974 in Belgrade, Serbia. Throughout his twenty-year long career, he has done a lot of work in directing documentaries, shows and reports on the subjects such as human rights, xenophobia, war crimes and interethnic relations, mainly in the region of ex-Yugoslavia, but wider as well. He is the author of several documentaries, among which are ‘Kosovo…Cheers!’ (NDNV/BIRN,2017), ‘Auschwitz- Yugoslav memory ‘ (RTV 2015), ‘A box of memories’ (RTV, 2017), ‘Zid’ (2015), ‘Stuck in the nineties’ (RTV, 2012).