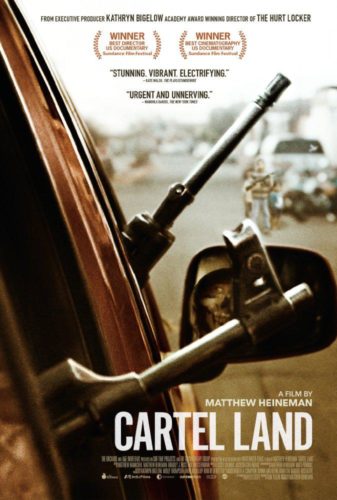 A physician in Michoacán, Mexico leads a citizen uprising against the drug cartel that has wreaked havoc on the region for years. Across the U.S. border, a veteran heads a paramilitary group working to prevent Mexico’s drug wars from entering U.S. territory.

Matthew Heineman is an Oscar-nominated and Emmy-winning filmmaker based in New York. His latest film Cartel Land was nominated for an Academy Award for Best Documentary Feature and won three Primetime Emmy Awards.

Previously, he directed and produced a feature-length documentary Escape Fire: The Fight to Rescue American Healthcare. Heineman collaborated for two years with a team at HBO on the groundbreaking, Emmy-nominated HBO series, The Alzheimer’s Project, which aired in May 2009. Heineman has directed several short films and commercials and is in development on a few different projects.